What is a Pirate movie rated? Rrrrrrr.

My vivacious 9-year-old daughter told me this joke when she saw me reading the book written by Dave Burgess titled Teach Like A Pirate. After the joke she began questioning me about the content of the book. A lively discussion on teaching ensued. She finished by announcing "It takes a lot of work to teach well Daddy."

A captive title, a cute joke, then a student-led, student-centered teaching style is what Teach Like A Pirate (#TLAP) is all about. In this book Dave Burgess has provided teachers with methods, tactics, and strategies that he has found successful. To be completely forthcoming, this is the first edu-pedagogical book I've read since I was forced to do so in my undergraduate studies. Postive twitter traffic and #TLAP chatter on this book sparked my curiosity. And when gifted with an Amazon card from a student I decided to make a pirate purchase. From the time the book hit my doorstep I began to devour it.

In less than 48 hours I finished reading TLAP. Before opening the book, from our tweet exchanges, I knew the author and I had some similarities. Both of us are Social Studies teachers with near the same number of years of experience, we're both coaches, as well as, professional development presenters that utilize twitter as a forum to share, collaborate and perfect our craft. Little did I know, we had more in common than I thought; I had been TLAPing my entire career. Most profound throughout the book is the promotion of an essential attribute of a pirate educator: a never stop learning, never stop creating and never stop collaborating work ethic. Pirate educators are relentless in their pursuit of mastering the craft.

Standing out, among all of the incredible teaching topics covered; that varies from passion, rapport, feedback, analysis to lesson development; is creativity. What struck me when reading Teach Like A Pirate is that some teachers brush aside innovative lesson planning in much the same way a weight-watcher client may fail to lose pounds: excuses. George Washington once wrote, "It's better to offer no excuse than a bad one." Dave Burgess masterfully presents this perspective in a "six-word" paradigm that remains ingrained in my mind. He explained that a teacher once told him "It's easy for you. You're creative." Being creative, innovative, imaginative and inspirational in your practice as a teacher is hard work. Creativity, as he brilliantly demonstrates, isn't an innate attribute or talent that people are born with; one doesn't simply pick up a brush, paint and a few days later show some on-lookers their completed work on the ceiling at the Sistine Chapel. Success is determined by pursuit, dedication, and effort towards mastery of a specific form of art. Creative teaching is an art form; like any form of art, to be highly effective at it, one must put in the time needed to achieve it.

Teach Like A Pirate is about sharing these creative lesson planning strategies. It's about learning how to be a creative teacher. We're all a creative genius in one form or another, but maybe our genius needs to be developed more. Dave Burgess is, within the pages of his work, essentially teaching teachers to do what it is that they do on a daily basis; he's advocating his readers to learn creativity. Even if you're a creative teacher this book will still open up a new world to you. It's with the highest of recommendations that AskteacherZ gives a #TwoThumbZup to Dave Burgess' book Teach Like A Pirate. Pedagogy is all about continued professional development, sharing, and self-advocacy. Get yourself out-of-the-box, put on an eye patch and get into the Burgess Boat as we have; you'll be a better educator as a Pirate. 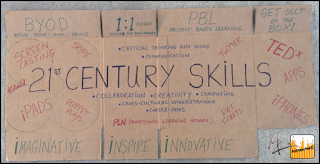