Teachers and Superman: Adapting to a World of Cell Phones

Superman fan? I've always enjoyed superhero movies. One particular scene from the 1978 original Superman movie, starring Christopher Reeves, stands out and inspires me to be a better educator and person.

A disguised superman, portrayed as a mild mannered typical white-collared worker, needed to switch into his blue spandex and red cape uniform to save the citizens of Metropolis from harms way. No worries. A quick change of clothes in a phone booth is the patented move for the son of Jor-El. On the street he immediately finds a phone but there's no longer a booth; it's a small receiver station with no door. What now? Adjacent to where he stands is a revolving-door unit. Problem solving in the heat of the moment is his forte. He acts quickly and uses the turn-style door to make his transition from Clark Kent, the reporter for the Daily Planet, to Superman, the hero of the people.

Metaphorically this superman movie snippet encapsulates the world of education in several ways. For starters, in this ever changing world, educators, like Clark Kent, must problem solve and determine alternate strategies to accomplish tasks so frequently it's beyond measure. Both also serve the people; for better and worse Superman and Teachers are servants to those whom they've dedicated their lives. Successfully working on behalf of the people depends upon the acclimation to one's surroundings and the constant retooling of ones craft.

If classrooms are preparing students with the skills necessary to meet the rigor of the 21st century work place then conformity to ancient learning practices will not cut it. Teachers are lead learners. Leaders promote innovation, critical thinking, collaboration and risk taking. To promote these skills teachers must understand and employ them.

This mind shift is necessary. 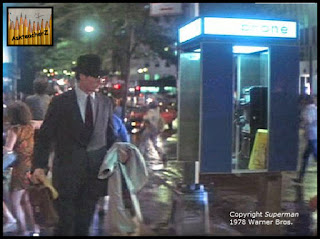 Pedagogical Adaptability is a choice; albeit it's not a difficult decision or is it? We've all come in contact with people that dismiss giving change a chance. That person, for whatever reason, that's resistant to attempt a new instructional tactic or use a new technology tool. Perhaps you've overheard someone that's quick to point out to others "You don't have to do that because -insert negative result here- is going to happen when you try it."

What drives and motivates these individuals to be this way? Maybe it's fear. Maybe it's because they're overwhelmed. Maybe they need help and they're not accustom to asking for it. Together we must move forward and overcome these obstacles because the people we all serve can't afford the result.

The "Set-In-His-Way Superman" would've missed a chance to save a life. If Clark Kent were reticent to change and resistant to adapting to his environment something as simple as a covert outfit transformation would result in tragedy. If he'd have continued to look for a phone booth rather than use the revolving-door the chance to help and save humanity would've past. Likewise, a new clothing conversion technique is lost. A new learned tactic that'd serve him and mankind well in the future. These same decisions exist more often for teachers and school administrators than for fictional superheroes. Revolving doors are everywhere for educators.

Those that work in education are superheroes. Their endeavors often go unnoticed. In one day as a middle school administrator, on top of all the spectacular learning I'm privy to experience from my daily classroom visitations, I also witnessed: secretarial and custodial staff rush to the aid of a student having a seizure; an educator walk a student to the clinic that had a bloodied nose; a teaching-assistant walk the entire playground with a distraught student until they found their missing cell phone; and a school administrator save a choking student in the cafeteria by performing the Heimlich Maneuver.

There's little doubt that educators are quick to act when someone is physically, socially and emotionally in harms way. Lets apply this same principle to when someone is intellectually in harms way. As educators we must be quick to act on trying a new form of acquiring professional development -- maybe it's being involved in a Twitter EduChat. As educators we must be quick to implement a new learning tool and attempt a new learning strategy. We must, as educators, be quick to collaborate with others. Be that Clark Kent Educator that's quick to take a risk, try that revolving-door and enter into a new, more profound world of pedagogy.

Oxnevad, Susan. Getting Smart. The SAMR Ladder Through the Lens of 21st Century Skills. 17 July 2013.